Are you excited? We certainly are! Why shouldn't we be? The 2015 Pikes Peak Writers Conference is just around the corner! It has been an absolute pleasure recruiting the incredible faculty that we have lined up for you this year and the workshops they will be teaching are proving to be just as amazing.

Pikes Peak Writers Conference is known as one of the best and friendliest conferences for many reasons. One of those reasons is that we provide as many opportunities as possible to not only learn from our faculty, but to get to know them. Keeping in the spirit of that very statement, we interviewed all of our faculty members to get inside their heads just a little. Really, we don't see the point in waiting until April. Do you?

Over the weeks to come, we will be posting those interviews along with the responses right here on the PPW Blog. Be sure to check in on Facebook and Twitter as well! We hope you enjoy reading these brief Q&As as much as we have!

1. What are the most compelling elements you feel are necessary for a good read?
Two elements come right to mind: voice and impeccable sentences. As an editor, I trip on awkward or unnecessarily complex or redundant sentences, and rewrite them in my mind. Really clean prose that zooms is prose that's been attended to on a line-by-line basis, and readers can feel and appreciate that care. The other bit is what you always hear about. I love to find a writer who can transport us with their character or story's voice (rather than write in their own voice). One misconception is that voice comes naturally or magically. I find that voice comes with tons of rewriting; the more you know your characters, the easier it is for them to speak for themselves.

2. What do you see as the pleasures and difficulties of being a writer/artist in today's world?
Writing for me is always the pleasure. The potential of finding an audience is very pleasurable. The difficulties are what they always are: finding the time, finding the people who'll love and support (and publish) your work. Nothing original to say here!

3. What is the best career/writing advice someone has given you?
Always. Be. Writing. That's cribbed from "Glengarry Glen Ross." I am terrorized by the thought that if only today, had I written, I would have had the breakthrough thought that would make this book sell... And of course if you are always writing, then you are hacking away at the hours it takes to finish a book, to be a better writer, to be the writer you need to be to sell.

4. Would you pass that same advice on or alter it?
I pass it on and sometimes I even follow it.

5. What do you love most about your career?
What's not to love? As a teacher/editor, I get to work with writers every single day of my life, and besides the act of writing itself, it's my favorite thing in the world. Helping someone take on their dreams...nothing is cooler.

6. What is something you wish everyone knew (or didn't know) about you?
Nothing, I don't think. I stay as private as I need to for my two-thirds-introvert personality, and as public as I need to to be successful at my work.

7. Which fictional character do you relate to the most, and why? What character would your friends/family pick for you?
As a kid, I had a tendency to relate entirely too much to fictional characters. Often more than real people. My favorite was Starbuck from "Battlestar Galactica" (the original Starbuck, played by Dirk Benedict). Granted, there weren't a lot of women role models in the 1970s and '80s, but I've never thought of gender as a barrier to identifying with a person. Starbuck was the best pilot, legendary really, but also a total scoundrel--a gambler, a lover of vices in all forms. But he was also unrelentingly optimistic, handled his business, backed his friends, saved the fleet countless times, and always had a quip ready.

I was not like Starbuck. At all. He was just the person I would have wanted to be. And in that way, I related to him.

As for my family, they'd probably say I was more like Kara Thrice, the female reincarnation of Starbuck in the new "BSG."

Pen or Keyboard? Keyboard. I can barely type as fast as I think; writing longhand would be hopeless.

Spicy or Mild? Spicy. But not the regular spices Americans usually go for; I love Indian, Ethiopian, and Asian spices.

Sunrise or Sunset? Sunset. It tells me how many more hours of writing I can get in before I go to bed.

Mister Rogers or Sesame Street? Neither. I came up on "Battle of the Planets" anime. 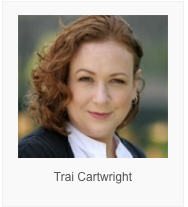 TRAI CARTWRIGHT, MFA, has over 25 years experience as a professional story breaker. While in Los Angeles, Trai was a development executive for HBO, Universal Studios, Paramount Pictures, 20th Century Fox, and Leonardo DiCaprio’s online ventures. Four of Trai’s screenplays were optioned, she produced three independent films, and she hasconsulted on literally thousands of scripts and books. She brings her in-depth knowledge of story building to all writing formats as a creative writing and screenwriting teacher for UNC, the Colorado Film School, writers groups, conferences, and one-on-one. Trai can be found at www.craftwrite.com.
Posted by Writing from the Peak at 8:00 AM