Catherine Dilts is pleased to announce two Sweet Success Stories. First is the release of her debut mystery novel, Stone Cold Dead, which became available in Kindle format on December 12, 2013, and then the hardcover, available as of January 8, 2014. It is published by Five Star-Gale/Cenegage Publishing (ISBN # 978-1-432-82743-4) and is available at Amazon.com. 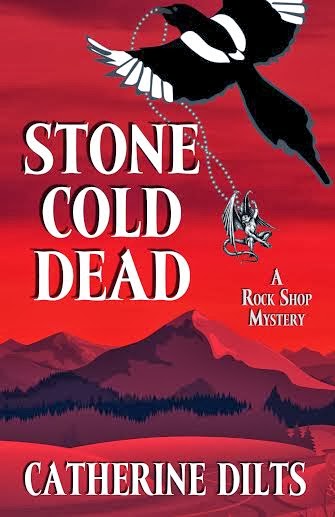 When her brother abandons the family rock shop, recently widowed Morgan Iverson reluctantly becomes the manager. Business is as dead as the fossils cluttering the dusty shelves. While rounding up a runaway donkey, Morgan discovers a body. After a newspaper article hints that Morgan witnessed the Goth teen’s demise, escalating threats make it clear the killer thinks she holds a clue to the teen’s murder. Morgan knows her life won’t be worth a pile of fossilized dinosaur dung unless she can dig up the murderer.

In addition to her debut novel, Catherine will also have a short story, Tweens, published in the May issue (on stands February, 2014) of Alfred Hitchcock Mystery Magazine.

Caroline Omiata is a Tween - too old to find a job, and too young to retire. When living with her daughter's family doesn't work out, Caroline accepts an offer from a brassy former co-worker that she can't refuse. The late night deliveries and envelopes full of cash convince Caroline they are disposing of Mob hits, but her troubles escalate when she joins an environmental group seeking publicity for their cause, no matter the cost.

Tweens is her second short story to appear in AHMM. It also placed second in the 2012 PPW fiction contest in the short story category.

To Catherine Dilts, rock shops are like geodes – both contain amazing treasures hidden inside their plain-as-dirt exteriors. Publishers Weekly calls her novel Stone Cold Dead – A Rock Shop Mystery, an “enjoyable debut,” and that “readers will look forward to seeing more of this endearing and strong protagonist.” Catherine works as an environmental scientist, and plays at heirloom vegetable gardening, camping, and fishing. She has published short fiction in Alfred Hitchcock Mystery Magazine. Visit her at http://www.catherinedilts.com/

We love to hear of fellow Pikes Peak Writers' Sweet Successes, including story acceptances, winning contests, getting published and book signings. Please email Kathie Scrimgeour at ppwsweetsuccess@gmail.com if you've got a Sweet Success you'd like to share.