By: Karen Albright Lin
Subplots are secondary stories intertwined with your main plotline. They’re necessary in longer works such as novels and feature-length screenplays. They add depth to your story by complicating and advancing your plot. They are not little extra stories thrown in for fun. They’re interconnected. They can be about evolving relationships, personal growth, tied-in events, anything that complicates your plot.

As your antagonist overcomes obstacles to reach a consequential goal, the stakes are made even higher when other situations or characters becomes involved, ones that matter to the main character or to the world. Each layer of conflict must impact your lead.  When it doesn’t we are disappointed. In the 2013 The Purge, we have a main plot reminiscent of Soylent Green, Logan’s Run, The Hunger Games, and The Lottery—involving a state-sanctioned “healthy” purge of the population. A daughter has a boyfriend who wants to be accepted by her parents who happen to be under siege by envious neighbors on a sanctioned night of murderous rage. Though he got in the house in some unknown way, he is kind to his girlfriend, even resisting sex, wanting to first get her family’s blessing. Then out of nowhere he shoots the girl’s father. Which wouldn’t endear himself to anybody. It is never brought up again. Why did he do it? Why didn’t it play into the overall plot? Especially after he’s shown himself to be moral. For the rest of the movie, I was distracted by this, wondering when I’d learn how this had any influence on the main plot. I was disappointed.
If you have a bigger-than-life main plot, subplots can be used to make it more relatable. In The Purge, the boyfriend/girlfriend interaction was one we’re familiar with, unlike government-prodded murder sprees. It could have been put to good use, but the subplot was squandered. 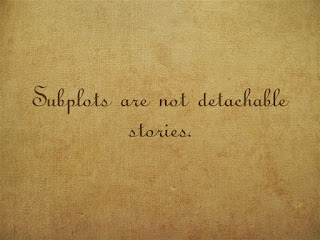 Subplots help us understand character better. Mel Gibson in Lethal Weapon is despondent after his wife dies. We understand, then, why he goes on what seems like a suicidal mission to thwart the bad guys. Coming to terms with his pain is a backstory subplot enlightening us on character, making us care.
Even if a subplot primarily acts on a secondary character, it should still have an impact on your protagonist. The mother in my favorite movie, Harold and Maude, has her own superficial relationships and diversions separate from the life of her son. And yet, in large part, her material and snobbish distractions help form Harold into the dramatic “emo-wanna-be” that he is. She is germane to what drives him, yet she seems peripheral to the main plot, which is an unlikely love story.
A subplot can even drive the main plot forward. Young boy Cole sees dead people in The Sixth Sense. His struggle is the vehicle by which Bruce Willis discovers that he’s dead. Cole has a separate plot of his own in exposing the poisoning of a young girl. Bruce Willis’s character also has a jealousy subplot in which he thinks his wife is having an affair.

Think of subplots as goals. You have long term goals such as becoming a senator. You have medium term goals like getting a degree in political science. You have shorter term goals like convincing a professor to hire you on as an intern. There are also those very short term goals like dressing smartly for the interview. For this reason, it would ring untrue if your secondary plots all lasted exactly the same length of time. Your main plot is typically the last or next to the last to be resolved. Bang, it is solved… plus there may be a subplot resolved quietly in the dénouement, like a tender moment of redemption or reconciliation or renunciation. The possibilities are endless, but do make each relevant.
Subplots justify otherwise extreme or inexplicable behavior. My favorite movie backstory subplot is from Air Force One. Poor president (Harrison Ford) has to go up against the unstoppable hijacker (Gary Oldman). Why would a bad guy do what will likely leave him dead in the end? We learn that his Russian family and friends have died in what he believes is an American made war. He has revenge and the release of a compatriot hero as his goals.  He is the hero of his own story. Without that subplot we wouldn’t buy into what would be a ruthless cardboard antagonist. Building backstory subplots serve another purpose.  The best antagonists are ones that we like or empathize with on some level—think Hannibal the cannibal in the brilliant Silence of the Lambs; he’s smart, intuitive, and cultured.

Hannibal himself is motivated by getting out of prison. His mini-story is a perfect example of how a great secondary subplot can take your novel to the next level, IF it makes the conflict for the main character all the more difficult.
Complications are key to successful subplots. A love interest being taken hostage as the bad guys head toward an Ebola-contaminated village will certainly complicate what might have otherwise been simply a plot about preventing the outbreak of Ebola hemorrhagic fever. Subplots thwart problem solving, making goals harder to reach, better yet, seemingly impossible.

Successful subplots enhance theme.  In my suspense novel in progress, isolation plays a role for a few of the characters. It is a blatant diagnosis in one: an agoraphobic secondary character. It is a toxic time bomb in my antagonist. It is a backstory requiring personal growth in my protagonist. Isolation is damaging and critical to the resolution.
Subplots are not detachable stories.  Test each subplot to see if its progression interacts with your main storyline. I find it useful to imagine each plotline as an undulating line with points of intersection with the other plots. 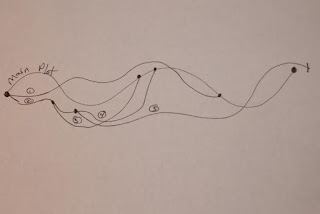 It can be especially powerful if the subplots all come together at some point. For example, imagine a main plot line of saving Chicago from a renegade group with a nuclear bomb.  But we’ve been developing a cop-partner relationship subplot along the way: the obstacle to our heroin taking the marriage plunge is her personal baggage from a failed relationship. Let’s hit the main plot climax at the same moment she realizes she needs to let go of her painful past and accept her beau’s proposal.  In the same scene, there’s an external resolution as they disarm the bomb, an interpersonal resolution when she accepts a lifelong commitment, and a personal resolution as she comes to terms with her past.

What I like to do is make a timeline for each of my plots, how it waxes and wanes, its climax.  Then I make note of where each intersects with the main plot. This helps keep chronology straight, gives me a clear idea of where a subplot should begin and end, and points out how it adds to the overall conflict and complexity.
Our lives are multi-layered. Our stories should also be. Subplots can offer up allies, foils and opposing viewpoints. Subplots can be funny or otherwise entertaining, but they must be more than that. Unlike life’s unpredictable and unrelated diversions, subplots shouldn’t feel thrown in. Have them intersect and complicate your main plot. They will add important dimensions to your story.

About the Writer: Karen is an editor, ghostwriter, pitch coach, speaker and award-winning author of novels, cookbooks, and screenplays. She’s written over a dozen solo and collaborative scripts (with Janet Fogg, Christian Lyons and director Erich Toll); each has garnered international, national and regional recognition: Moondance Film Festival, BlueCat, All She Wrote, Lighthouse Writers, Boulder Asian Film Festival, SouthWest Writers Contest, and PPW Contest. Find out more at www.karenalbrightlin.com
Posted by Donnell Ann Bell at 8:00 AM