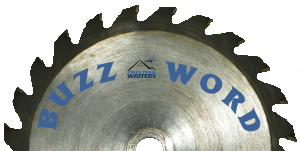 Lots of phrases, buzzwords, slang, jargon, and perfectly cromulent words are thrown about critique groups on a regular basis. Newcomers to critique groups can mentally stumble when they hear something along the lines of, "The POV in your WIP head hops through white room syndrome, and all of the narrative is written in passive voice with lots of tense shifts."

POV? WIP? White rooms? Is there padding on the walls of these white rooms? I feel like I'm going insane! I know I'm tense, but how is that shifting around? 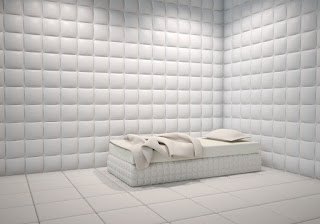 Have no fear. I'm here to help expand your vocabulary into the writerly world of the critique group.

Words, like many animals, are deeply territorial. They don't mind sharing their space with other critters, but bring in one of the same species, then all hell breaks loose. This means if you use the same word in a short span of time in your prose, the word will get angry and leap out to the reader as a distraction from the story you're trying to tell.

You may hear phrases like "power words" or "overused words" as well, but those are different issues (which will be covered in later articles). In the case of word territory, if the same important word appears multiple times on the same page (or within the span of a few pages), then you have a word territory issue.

Most new writers tend to overuse a character's name, and this can lead to reader exhaustion as they tire of reading the same repeated moniker. A trick I use (but try not to overuse) is to give some tags or phrases to each character and use some of those in place of the character's name. As an example, I have a character named Laurin. She is a Warmaiden who is a warrior-priestess in my world. I'll swap between "Laurin," "Warmaiden," and feminine pronouns to represent her place in the prose.

Now that I've brought up pronouns, I want to mention overuse of that particular part of the English language. I was fortunate enough to work with an editor who despised pronouns, but recognized when they should be used. Through working with him I reduced my pronoun word count. Seeing "she" or "he" several times in the same paragraph can become tedious to the reader and is an indication of a word territory issue.

How do you identify word territory problems? As most folks know, I work in technology for a living, so I leveraged my software engineering skills and created a tool. If you head over to http://jtevans.net/tools/passive_territory/ you'll find what I created and the instructions for how to put it to use. The Passive Territory Checker will help you find overused words, some indicators of passive voice (also a future article), and might help you clean up your prose a bit.

How do you reduce word territory? In my case, I tend to restructure sentences to "dodge" the overused word to eliminate it from the prose. In other times, I'll whip out the thesaurus and find a different (and usually better) word to drop in place of the overused word. I make sure the sentence restructuring doesn't require weird grammatical gymnastics because that will throw the reader even more, and I also ensure my replacement words truly fit the meaning and intent of the sentence.

As with all guidelines of writing, there are times when overusing a word with intent and purpose can be a good thing. In one of my stories, I used the word "tears" four times in a single paragraph to drive home the point that my protagonist broke down and cried over four different things at the same time when life finally culminated into the perfect storm of stress and loss. According to my critique group, the repetition of "tears" created a powerful effect at that point in my story.

If you've heard a phrase or word in a critique group and you think others should know about it (or you're not sure what to think of it), drop me a comment below, and I'll add it to my list of Buzz Words to talk about.

J.T. Evans writes fantasy novels. He also dabbles with science fiction and horror short stories. He is the president of Pikes Peak Writers. When not writing, he secures computers at the Day Job, homebrews great beers, spends time with his family, and plays way too many card/board/role-playing games.
Posted by Donnell Ann Bell at 8:00 AM