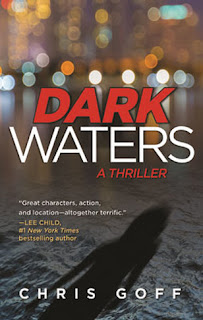 DARK WATERS is an explosive new thriller set amid the Israel-Palestine conflict. Diplomatic Security Service Agent Raisa Jordan is tasked with investigating the assassination of one of her own while protecting two endangered U.S. citizens—a federal judge and his eleven year-old daughter, Lucy. This is a series debut that mirrors global headlines and will have readers frantically turning pages. Booklist says, "Goff, known for her intriguing mysteries, reveals a knack for thrillers. A sure bet for fans of international thrillers;" Publishers Weekly calls it a “strong first thriller;” and Lee Child says, “Great characters, action and location—altogether terrific.”

Chris Goff is the award-winning author and two-time WILLA Award Nominee of six environmental mysteries and a new international thriller. She began her career writing non-fiction for local newspapers, and articles for regional and national publication. Later she edited rock and ice-climbing guides for Chockstone Press and worked in graphic production for a division of The Morehouse Publishing Group. She has taught writing workshops nationally and internationally, and served on the national board of Mystery Writers of America. Her current novel DARK WATERS is the first in a series, and she currently working on RED SKY, due out in 2016.