NanoWriMo? No! Don't Make Me!

I really like it that as human beings we now have the ability to publish books rather easily. I think the more books we have the better. I don’t believe in gatekeepers. I don’t believe that only good books deserve to be written. I believe in all books, the good, the bag, and the ugly. If you want ugly, Allison M Dickson wrote STRINGS, which is kind of like the Texas Chainsaw Massacre meets The Sopranos. But only better. It’s, um, ugly all right, but awesome.

Many people spend November writing a novel, because, as you probably know, November is what we in the industry like to call NanoWriMo, or National Novel Writing Month. I know lots of authors who sold their NanoWriMo book and made a career out of it. My friend L.A. Witt was dared to write a male/male romance for NanoWriMo, and bam, years later, she is a bestselling warrior woman. Her books would fall under the good category, if your tastes run toward the spicy jalapeno side of romance.

NanoWriMo. November. You have thirty days to write a fifty-thousand world novel. On your marks, get set, go.

This encourages people to write books and later, to edit those books, and then publish those books. Which I fully support.

I love the idea of NanoWriMo.

I will never, ever, ever do it.

You know what else is not for me? Writing with people. I hate that. Ew.

Because when do you talk? Should I talk to you if you’re not typing? What if you’re thinking? Worse yet, what if you want to talk to me while I’m writing? No. Shut up. Go away. I’m working.

And sometimes when I’m not pounding on the keyboard, I look up, and our eyes meet, and I’m a million miles away, but you might think I’m coming on to you. It’s awkward. That happens to me at coffee shops, but then we’re strangers, so it’s easier to glance away. Or for them to call the police.

So, no, I don’t write with other people. I write alone…well, I like to write in coffee shops while I stare at people. Or cry. I do a lot of crying when I write, and laughing, and yelling. Starbucks has a restraining order against me.

I will not do NanoWriMo. You can’t make me! Do you know why? Do you? Do you?

Getting words on the page isn’t my problem. I can easily sit down and write three thousand words. Without breaking a sweat. Yeah, I’ll probably cry, but we’ve covered that.

My problem is editing. I have to take the words and, gasp, cut some, add some, and change most of them. I craft really awkward sentences because I forget words that could make my life easier. An example?

Bad sentence: I lifted my arm, bending my elbow, my wrist at a ninety-degree angle, while holding a frothy cup of ginger ale.

Good sentence: I raised a glass of ginger ale.

So yeah, I need help taking my tens of thousands of words and making them readable. NanoWriMo ain’t about that. Maybe we need December to be NanoNoEdiMo month. National Novel Editing Month. But then there’s Christmas. My wife frowns when I write on Christmas morning. Dumb holidays and family. Sigh.

And if I did NanoWriMo, well, it would kind of limit me. I mean, I’m working on short stories, I’m editing, I’m doing marketing, and yeah, I’m writing new books. All the time. But it’s all jumbled together, and focusing on one project for a month? Um, I’m not sure I could do that anymore. But don’t get me wrong. I don’t think NanoWriMo is for newbies. I think it’s a great tool to focus people, for amateurs and veterans alike.

It’s just not for me.

I’m odd. Different. I'm not like other boys. I know people who love to go on writing retreats and write with other people, all day long, in some exotic location.

That’s my definition of hell. I’m not a binge writer unless I have no choice. I like to write, for about two hours, every day. Thanksgiving included. But not Christmas.

So, writing retreats, like NanoWriMo, is great for most people, they’re just not right for me.
But do you know what I think the goal is of NanoWriMo?

Work, my friends, work. We’ll all be dead soon, and the world needs your stories. Now, more than ever.

Even the bad books. 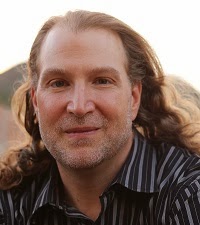 Aaron Michael Ritchey is the author of The Never Prayer, Long Live the Suicide King, and Elizabeth’s Midnight. In shorter fiction, his G.I. Joe inspired novella was an Amazon bestseller in Kindle Worlds and his steampunk story, “The Dirges of Percival Lewand” was part of The Best of Penny Dread Tales anthology published through Kevin J. Anderson’s WordFire Press. His upcoming young adult sci-fi/western epic series will also be published through WordFire Press. In 2015, his second novel won the “Building the Dream” award for best YA novel, and he spent the summer as the Arist in Residence for the Anythink Library. He lives in Colorado with his wife and two ancient goddesses of chaos posing as his daughters.

For more about him, his books, and how to overcome artistic angst, visit www.aaronmritchey.com. He’s on Facebook as Aaron Michael Ritchey and he tweets - @aaronmritchey.
Posted by Aaron M. R. at 7:00 AM