Innie or Outie? The Writing Process 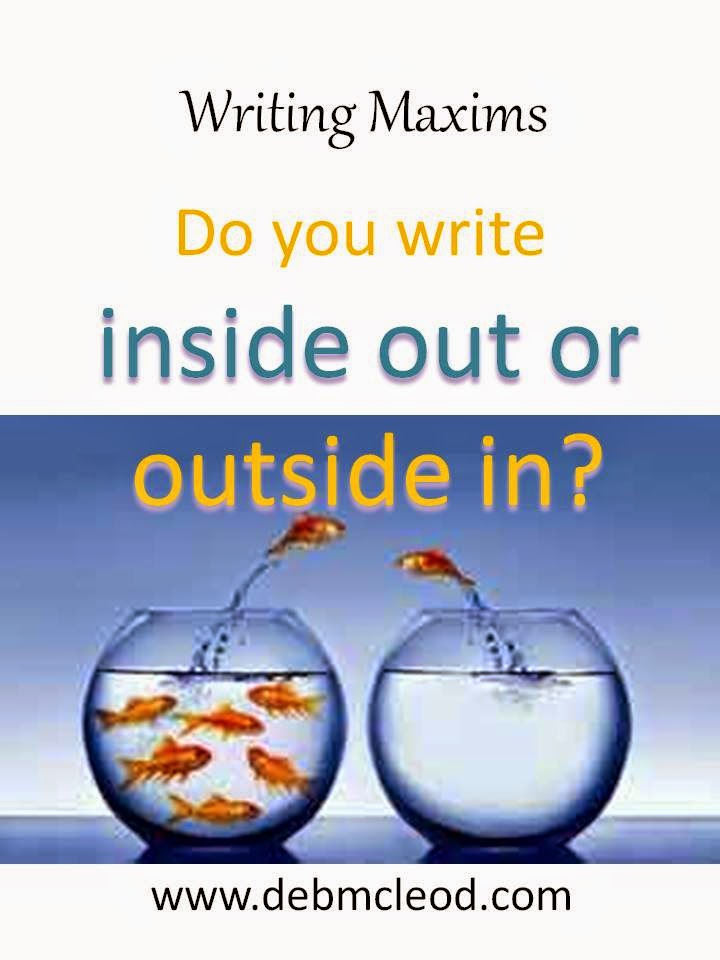 Are you an innie or an outie?

In my fourteen years of coaching, I have witnessed and coached the writing process from two different camps. Most clients tend toward one or the other.

For some clients, the story they are telling has a deep psychological or actual connection to their world experience. For these writers, the story comes from inside. The outie crafts a story that originates from his head, divorced, in the beginning, from his experience and feelings.

Each camp has its advantages and challenges. 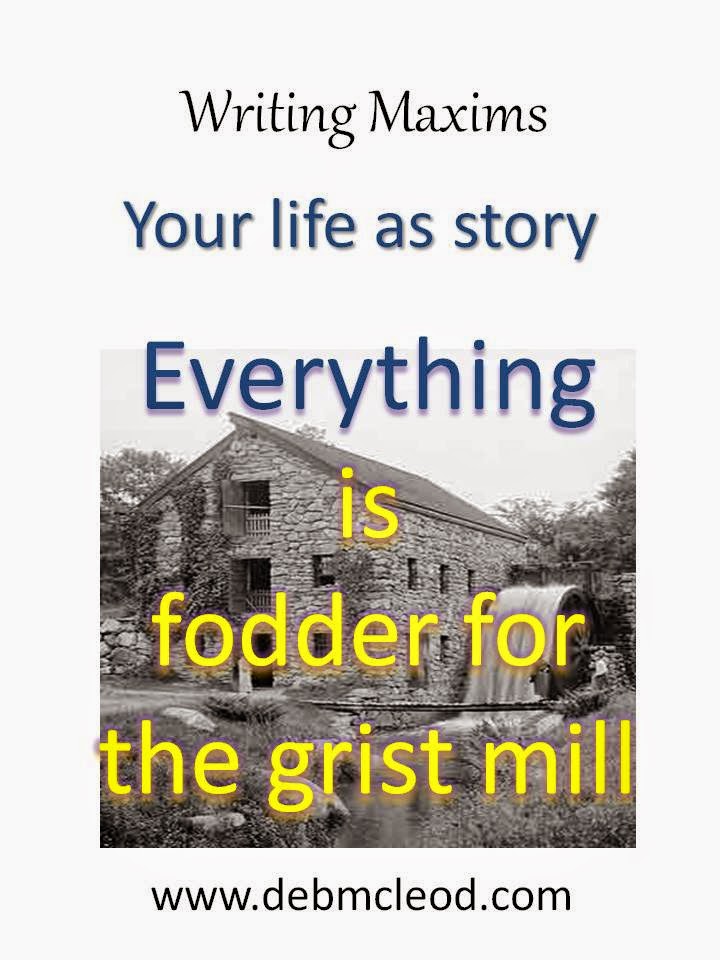 For Outies
There’s often a reason outies don’t write innie stories. Connecting with your emotions can be unpleasant, not to mention difficult. Especially if you typically avoid feelings, or avoid looking at the events in your life like you might look at the events in your characters' lives.

But the best stories create an experience for the reader. It may certainly have intellectual components, but it will be a far better story if the reader connects on the visceral level of emotion. We all have emotions and everyone possesses the fodder for all the stories they’d ever want to write. It just comes down to process.

Here’s an example:
While I never actually experienced being relentlessly preyed upon by a two-headed alien from the purple planet of Plarten, if that were my story I could recall and borrow from the emotions of something that happened to me in high school.

I know what it feels like to be stalked and harassed. In high school my best friend’s boyfriend hired someone to throw rocks through our house windows, to let the air out of our tires and generally be a stalker-turd for a few weeks. This was in the '70s before stalking was popular. He had convinced himself that I made his girlfriend break up with him. While I didn’t make her, tell her or ask her to break up with him, she likely knew I thought he was a jerk. So he blamed the loss of his love on me.

I can bring up the sick fear I felt watching my mother shake and cry because someone threw a rock through her bedroom window, shattering glass all over her in the middle of the night. I found out years later that the kid the stalker-boy hired got the windows wrong. It was supposed to be my window.

I can dredge up the pride in the camaraderie I saw and felt when my brother, four of his friends and my father took turns hiding in the bushes around the neighborhood all night for almost a week, watching for the red Mustang neighbors had seen just before our picture window smashed.

I can remember my father’s story about being approached at work by someone he barely knew who apparently had mob connections and heard we were having a problem. He wanted to know if my father wanted the boy taken care of.

And I can bring up the righteous vengeance in my heart when my boyfriend confronted stalker-boy with a shotgun, two friends and a punch to the face that knocked him flat and stopped his harassment.

In the story of my high school stalker-boy, the narrator (a younger me) experienced fear, shame, anger, pride and vengeance and combinations of all those feelings in all the scenes throughout the event. If I wanted to borrow those emotions for my current story, I’d just do a freewrite or two and recreate the scenes on the page.

There’s a wonderful little exercise from Writing the Wave by Elizabeth Ayres called 'Me / Not Me' that talks about this process. You make a list of “me” events (things that happened to you) and a list of “not me” events (things that will happen to your character) side by side and parallel them to one another. You freewrite the “me” scene and then you borrow from that and write the “not me” scene.

Bonus
There’s a bonus when you do these types of exercises. Besides perhaps healing some lingering feelings around something that happened to you, you get to look at the incident from a different perspective.

When I was writing down the events of that time in high school and remembering what it felt like, I started to focus in on the small anecdote of my dad being approached by someone at work who could take care of the situation. My father told us at the dinner table that night and it was a “can you believe that?” story.

We lived in a suburb between Buffalo and Niagara Falls, NY and my father was a chemist at a large company in Niagara Falls. At the time, Niagara Falls had a mob presence. It wasn’t unusual for my dad to tell us that while he was at lunch some mob big wig came in to the restaurant. He’d describe how two guys would come in first and check out the restaurant and then the boss would follow. That wasn’t our world but it did exist.

But as I was writing this blog I began thinking how I would tell this story if I were going to actually write it. I can see now that the mob piece was the turning point in the whole event. The police couldn’t do anything. They’d already talked to stalker-boy. We were focused on catching him. But with that one suggestion, we now had a choice. As abhorrent as that choice would be (and I could never see my father actually choosing to let them take care of stalker-boy), after that we no longer felt so helpless. After that my boyfriend confronted stalker-boy on his own and got it stopped.

And the offer made the entire event real in a way it hadn’t been before. Sure it was all real, property was damaged, fear was rampant, anger rippled through everything. I was helpless and shamed that it was me who brought this into our lives. All of those emotions came in to play at one time or another in the story. But it was high school. Not mafia, for heaven’s sake.

It could all be over with the simple word: yes. Someone would do my father a favor. Temptation attached to a cold fear that far outweighed anything we had felt when the rocks first shattered our world. And favors need to be repaid.

While I wasn’t present in that scene, I can write it, even from my father’s point of view. I can borrow from the cold silence that settled over the kitchen table when he told us at dinner that night. The way we avoided one another’s eyes. The way my stomach felt. The way my heart hoped, my conscience shouted and my head was completely astonished that this could possibly be happening. With the advantage of hindsight I can see how this incident might be pivotal to the story. And I can borrow from the story that happened to me and inform the two-headed alien piece with both emotions and plot ideas. Or I can now write the story straight – as an innie.

If you’re an outie, you would do well to find the events in your life that relate to the events in your characters' lives. Get back into that space and explore. You might find yourself remembering and healing and you will definitely get ideas for your story.

The innie already has the emotional connection. But the innie has to pull the story far enough out to be objective about what’s important to include and what isn’t. In my stalker-boy story, the mob connection wasn’t important at the time, but it could be pivotal to telling the story now. Innies need to look at the events and shape them in a way that best tells the essence of what they want to tell. They are looking for events that serve to tell the emotional truth of a story.

Innies also have to beware of the shorthand they might use because they lived the story and get all its nuances while the reader doesn’t. Again, it’s a matter of getting objective about the material. How do you do that? Freewrite the scenes, peel them from inside onto the paper and stand back to see what you have.

Another issue for innies is the experience of hindsight. A retrospective vantage point can be a blessing as was my realization that the mob piece would be important. It can also be a curse when the writer inadvertently uses hindsight as a distancing mechanism. The writer has already lived the story and come out the other side. They are the changed character in the story. So they might find it challenging to bring the reader along on the same journey they took.

With my innie clients who were writing memoir or fictionalized memoir, this has been a challenge. The older, wiser voice wants to insert itself, when what’s called for is for the character to be the naïve character they were when they were about to walk off the cliff or make an enormous mistake in the story. The innie knows they made that mistake in their real life and they know it taught them everything but they have to not tell us they learned it. Not yet. They have to show us the journey and truly create a character who lives the change on the page, not in some distant past that is one layer removed because the author doesn’t want the character to look vulnerable or stupid.

This is a matter of learning what makes up the arc of change in fictional character and representing it in a way the reader will see and experience the change.

No matter which camp or combination of camps the story comes from, it must engage the reader on an emotional level. And it must take the readers through the experience of change and growth as if they were the character themselves.

So what are you? An innie or an outie?

About the Author: Deb McLeod, MFA, practices novel research immersion. For her novel, The Train to Pescara, Deb journeyed to Sardinia to study ancient goddess worship and spent time in the Abruzzi village her great-grandparents left in 1905. Her metaphysical knowledge for the Angel Thriller, The Julia Set, culminates from four years of studying and teaching meditation, clairvoyance and chakra healing. For over fourteen years, Deb McLeod has been a creative writing coach helping other writers to embrace their passion and get their words on the page. For more, see www.debmcleod.com.
Posted by Deb McLeod The Writing Coach at 8:00 AM