Column: What I Learned About Writing From... By Debbie Meldrum

...The Sookie Stackhouse Mysteries by Charlaine Harris and True Blood, based on the books
1)      Give your protagonist a problem
Sookie is telepathic.  She hears everyone’s thoughts.  Almost all the time.  Which makes dating difficult since she knows exactly what her date is thinking about her, as well as all of his expectations.  Her gift has caused her to be labeled a freak in her small home town of Bon Temps, Louisiana.
Groovy problem, right?  And it’s not her only one.  She needs her waitress job at the bar in order to help make ends meet at home, where she lives with her grandmother.  Her parents died in a car accident when she was little.  And her older brother’s a bit of a screw-up.
I’ve said it before, but my critique group always tells me that I’m too nice to my characters.  Well, Charlaine Harris has no problem beating up—sometimes quite literally—on her characters.  Especially Sookie.
2)      The bad guys should be dangerous
In the world of this series, vampires have recently come “out of the coffin.”  The reason?  A synthetic blood substitute, Tru Blood, developed by the Japanese means they no longer need to feed on humans.
The problem is that Tru Blood isn’t exactly like human blood, so a lot of vampires aren’t about to make the switch.  And even if they are off the real thing, they are still incredibly strong and fast.  Some can fly.
Even when the bad guy isn’t a vampire, he (or she) is still a huge threatening presence.  Bon Temps has any number of really bad characters just waiting to do harm to our protagonist.  In addition to the vamps, there are werewolves, weretigers, werepanthers (you get the idea), evil fairies, ancient goddesses, religious fanatics, witches and just plain nasty human beings.
Wimpy bad guys don’t cut it, but I don’t want to make my antagonists look cartoonishly bad.  I don’t want a mustache-twirling Snidely Whiplash.  So how to find that happy medium between not-bad-at-all and over-the-top-evil?
I once read that the perfect antagonist is the mirror opposite of your protagonist.  Think Harry Potter and Voldemort, Darth Vader and Luke Skywalker, Krystle and Alexis Carrington.
3)      Too many characters CAN be a problem.
I tend to like a fairly large cast of characters.  Maybe it’s because I’m from a large family.  Or it could be from reading a lot of Dickens as a kid.  Whatever the reason, I don’t get confused by a lot of characters in a book.
However…along about book six or seven in the series, Harris had populated Bon Temps and the surrounding area with more than a dozen named vampires, half a dozen or more important werewolves, at least three fairies, a handful of witches, a shapeshifter, a few weretigers, a whole town full of werepanthers, and about twenty humans.
Even that wouldn’t have been too bad, except that she tried to fit everyone in for at least a mention.  The main storyline became diluted because of this.
Early in the next book, Harris started eliminating some of the characters, not all of them violently.  It made for a tighter story.
I’m still working on making sure that all the characters in my books have good reasons for being there.
4)      First person narrative has pros and cons
By sticking with Sookie, we get to know her.  She’s our window into Bon Temps.  We tend to feel about the other characters as she does.  She becomes us, or we become her.
The flip side is that we can’t experience anything without Sookie.  The latest book, Dead in the Family, suffers because of this.  Vampire Eric is visited by his maker and a new “brother.”  A lot of really interesting stuff happens between the trio—off stage.  We learn about it just as Sookie does, while the story it told to her.  It loses a lot of the impact that actually being there would have given us.
I’ve used both first and third person narrative.  I’m not always clear why I’ve picked one over the other.  But I think it’s time to take a really good look at the story I want to tell before I make that decision.
5)      You need to let go when you sell the movie/television rights
About midway through each season of True Blood, the television series based on the Sookie Stackhouse books, my friend Jenny asks me what’s going to happen.  Even though I’ve read all the books, I have no idea at this point.  The first season stayed somewhat true to the main plot of Dead Until Dark, but there were lots of people and situations in the television version that weren’t in the book.  And the last episode veered in a very surprising way from the book.
Charlaine Harris is always positive about the series in the interviews I’ve read.  She acknowledges that television is a different medium from books and, therefore, requires a different take on storytelling.  Good for her.
I’ve also read interviews with authors who blast any adaptation of their work.  It tends to leave a bad taste in the mouth of this reader.  Yes, the story is your baby.  Yes, you came up with the idea in the first place.  Yes, the studio/director/producer/network must have liked what you wrote if they wanted to adapt it.  However, you sold the rights.  Period.
The lesson here?  Should I be lucky enough to pen something that someone wants to adapt, I had better consider how much it would bother me to have my baby undergo extensive cosmetic surgery.  Would the money being offered be enough for me to keep my mouth shut about any changes?  Could I smile and nod about the movie/television show/play while thinking about my bank account?
Could you? 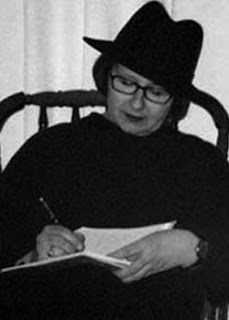 BIO:
Debbie is a daydreamer. A fact that caused her much grief during her school career but has served her well as a writer. Her short fiction has appeared in Apollo’s Lyre, The SCWP Marathon Anthology, and The S’Peaker. In addition to being a member of PPW, she belongs to Creek Writers Council—a tough but fun critique group.
Posted by Pikes Peak Writers at 10:24 AM