Context is More than a Setting

Your plot is solid. Your characters are fleshed out and fascinating. Your narrative sizzles. You feel your novel is a winner and yet something pinches at you. If your characters feel as if they are floating through your story, your novel may be short on context. There is more to consider than the all-important “character” we call setting. 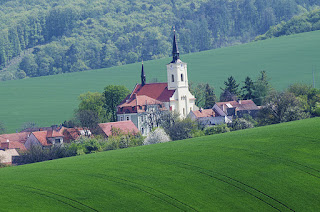 Context may start with describing a room or the route from home to church. But there are both macro and micro locales. Macro: Is yours a surreal planet, Earth or a prison?  Is your time period clear? Context includes many aspects of culture. How about the justice system and religions of those who populate your novel? Do your readers need to know about its counter culture? On the micro level, it is important for us to know the season and how it affects your story. Are there important props that tell us about your world and characters?

Below are a few ways of altering or elaborating upon your context to add texture, ground your characters, and create new potential for fun plot twists.

Addressing the big picture, you can change the setting, time period, even genre to alter the context. Move the mutilated body. Add fantastical elements. By fashioning a world in which magic exists, Pan’s Labyrinth explored the Spanish Civil war with some distance while reflecting the truly surreal nature of war. Joseph Conrad created the surreal world of a rogue colonel in Heart of Darkness set along the Amazon. It was re-imagined in Cambodia by director Francis Coppola in Apocalypse Now.

Speaking of Heart of Darkness, Conrad used another important part of your characters’ surroundings, smell.  It’s hard to forget the line, “I love the smell of napalm in the morning.” We have more sympathy watching Three Men and a Baby in the diaper changing scene because we can smell their predicament.

Make the world you’ve created not only psychologically surreal but visually so (The Cell, Trainspotting, 100 Years of Solitude, What Dreams May Come). You can even change elements that, if made into a movie, would alter the budget. Imagine The Blair Witch Project using CGI and elaborate sets.

Beef up the description and emotional power of your locale. The Poisonwood Bible makes full use of the land and politics of the Congo. We guess that Moby Dick wouldn’t be the classic it is if it hadn’t been written with the description of the water, the weather, and a prop that was a character, the albino sperm whale. But in fact, the tale of Ahab’s journey could have been told elsewhere using a different animal as his symbol of evil incarnate.

A change of season might change the story a great deal, especially an adventure novel or holiday story, maybe even a murder mystery. Weather can act as a symbol or reflect theme as was the case in House of Sand and Fog, The Ice Storm, and Winnie the Pooh and the Blustery Day. Changes in weather set some stories in motion like Wizard of Oz, Alive, Twister, Rocky Horror Picture Show, The Grapes of Wrath, and Cloudy with a Chance of Meatballs. 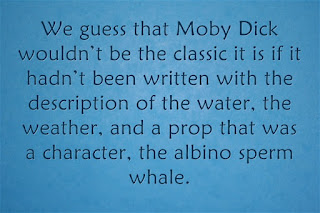 Props are fun and important elements in novels. Throw in a device with evidence on it (cell phone, camera, a computer). Consider changing technological capabilities of your world, and not only in steam punk and sci-fi. Throw in a monkey wrench when technology breaks down. Mr. Chekov was essential to the constant repairs needed on the Enterprise. Perhaps your technology is more pedestrian, like a vehicle thrown in for its comedic value (Robin William’s RV). Tech glitches can raise tension; cell phones usually lose their signals in horror stories.

While you are thinking about transportation, maybe change your protagonist’s mode of conveyance. Planes, Trains and Automobiles would have been different if a horse and buggy had been thrown in.

Explore everything in the world that’s in your reach. What if your props are your characters? Turn inanimate objects into your “people,” as in Toy Story and SpongeBob SquarePants. Think about how that changes the context; a toy box or the ocean become settings.

Make use of art (The Da Vince Code), a poem (The Redwall Series), a book (The Ninth Gate), letters (The Lake House) or research material (The Historian). The entire context of the novel changes with props like these.

Add an animal as a prop, one that comes with all kinds of responsibilities and scene potential as Janet Evanovich did in her Stephanie Plum series with her hamster, Rex.

The physical world, its culture and the objects that exist in it form the milieu and ambiance of your novel. You can drastically change your characters’ experiences by adding nuance and believability with context. By changing the environment in which the story is built, you might discover that it is best told in the Rocky Mountains rather than Coney Island. You may find that the props and animals in your story play a greater role than you originally thought. Maybe a change in the world will alter a personality or even call for a different point of view.

Think of Sandra Bullock’s experience in Gravity. If you feel your characters are floating like that but they aren’t in outer space, try giving them enough ground to stand on and distinct-smelling air to breathe. Beef up the context.

About the Author: Karen is an editor, ghostwriter, pitch coach, speaker and award-winning author of novels, cookbooks, and screenplays. She’s written over a dozen solo and collaborative scripts (with Janet Fogg, Christian Lyons and director Erich Toll); each has garnered international, national and regional recognition: Moondance Film Festival, BlueCat, All She Wrote, Lighthouse Writers, Boulder Asian Film Festival, SouthWest Writers Contest, and PPW Contest. Find out more at www.karenalbrightlin.com
Posted by Donnell Ann Bell at 8:00 AM