By the end of the school year, my creative writing students can chant a couple of my maxims in unison, because I’ve hammered them into their brains all year long:

Write characters as they are, not as they should be.

My agent started sending out my manuscript in early December, and though I’ve happily received some nice compliments, all are followed by something along the lines of “thanks, but no thanks.” And all of the criticisms center on two things. Think you can guess?

You got it: the main characters are too idealized, and there is not enough “at stake,” so the plot’s not really “gripping.”

How did that happen exactly? Why are my characters so “good,” and why is the plot…less than gripping? If you’ve been to enough workshops, and read enough of The Writer magazine, you know the answer.

I have a crush. And what do you do when you have a crush? You believe the object of that crush is perfect, or at least closer to perfect than any other pitiful excuse for a person on this planet. You’re wrong, of course. And thinking that way actually blocks you from getting to know that person in a real, authentic way.  That person never becomes real to you.

You also try to protect that crush from hurt and harm, and if you’re successful, well, that’s lovely, but you also don’t get to see that person in action. You don’t get to witness his or her strength of character, cleverness, resilience, patience, kindness, all-around awesomeness. Then you don’t get to fall into actual, honest-to-goodness love.

Alternatively, you don’t get to see them wimp out, duck, cheat, lie, steal, or take advantage of orphans and puppies to get themselves out of danger. And then you don’t get to feel delicious, passionate loathing.

In short, you don’t get to feel anything real.

Getting the theme here?

Me, too. So I’m going back in, people. I’m going to let my main characters be stupid and headstrong and say awful things they can’t take back (it’s actually already in them – I’ve been muzzling them all this time). I want to get to know them even better, and make my readers see themselves in my characters, or at least see someone they could swear they’ve met before.

And then I’m going to subject my characters to all kinds of torture—stuff they’ll sweat and cry and anguish over, until they’re finally overcomers and against-all-odds triumphant.

Because I want the readers to fall into honest-to-goodness, head-over-heels, but land-on-the-solid-ground love. 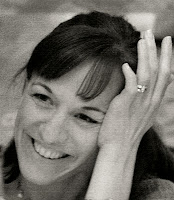 About the Writer:  Mandy Brown Houk is a freelance writer and editor, and she teaches at a small private high school in Old Colorado City. She's written for several magazines and anthologies, and has completed two novels--only one of which is worthy of the light of day. Mandy's work is represented by Sally LaVenture at Warner Literary Group. Her web site is www.mandybrownhouk.com.
Posted by Shannon Lawrence at 8:00 AM