Resist the Urge to Explain: Another Take

A while back, JT Evans contributed a post about the acronym R.U.E., or “Resist the Urge to Explain,” giving it a definition I’d never heard before. I thought I’d share my take on the subject with a more traditional explanation.

As authors, we want to make sure our reader’s “get it,” so we tend to go overboard with information, explaining far too much.

Here’s an example: "Mary laughed so hard, she was afraid she'd pulled a stomach muscle. Susie had just told the funniest joke Mary had ever heard."  The second sentence isn't needed; it's explaining something the reader would be able to figure out in context.

Another pitfall—telling something, then going on to show it. Let's say you're beginning to understand the "show don't tell" advice everyone gives you, and you do put the action on the page. For the sake of example, a simplistic passage might be written as follows:

After Bill cancelled their date, claiming his aunt was sick, Mary was depressed. She took one bite of chocolate cake, then pushed the plate away. 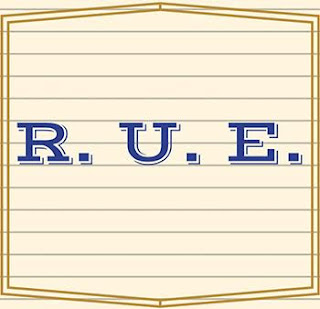 The second sentence shows what the first tells. If you find this in your writing, use your delete key on that first sentence. A better approach:

Mary had been looking forward to her date with Bill for weeks, but he'd cancelled, giving some excuse about a sick aunt. She moved the chocolate cake around the plate with her fork, then pushed it away.

The reader gets the information, and can see that Mary's depressed without having to be told. You can use the same to show other emotions. Maybe Mary was angry, not depressed, after Bill cancelled. Maybe she throws the whole cake against the wall.

Mary's feet felt like lead. She couldn't run fast enough to escape the man chasing behind her.

Cut the first sentence. You don't need both. What about:  Mary ran, but her feet refused to move fast enough to escape the man chasing her. Or, Mary's feet moved as though encased in lead shoes.

Sometimes, we tell the reader too much.


Mary twirled up two strands of spaghetti and waited for the excess sauce to drip onto her plate. Leaning forward, she manipulated the fork into her mouth, then wiped her mouth with her napkin. She was a very careful eater because she hated getting stains on her clothes. 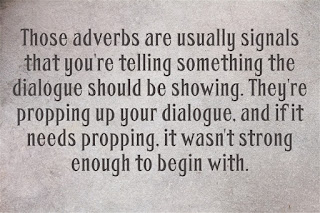 Don't insult your reader with the last sentence. No need to explain. We can see for ourselves Mary is a meticulous eater.

Another common place writers need to Resist the Urge to Explain is in dialogue. Too often, we tack on tags or beats that tell the reader what the dialogue has already shown. Are you adding adverbs to your dialogue tags?

Those adverbs are usually signals that you're telling something the dialogue should be showing. They're propping up your dialogue, and if it needs propping, it wasn't strong enough to begin with. All that 'scaffolding' merely calls attention to the weak structure beneath.

Will your reader notice these differences? Probably not, but they might not enjoy the read even if they can't explain why. However, agents and editors are tuned into them, and if you're submitting, you don't want to send up any red flags.

Check your manuscript for 'emotion' words, especially if they're preceded by "was" or include "felt." Are you describing your character's feelings? Don't tell us how your character feels. Show us.

Check your dialogue tags and beats. Are they consistent with the words being spoken? If so, you don't need them. If not, your readers will be confused, trying to reconcile dialogue with the action.

Readers are smart. Don't patronize them by 'talking down' to them.

About the Author:  Terry Odell always wanted to "fix" stories she read so the characters did what she wanted. Once she began writing, she found this wasn't always possible, as the mystery she intended to write became a romance—a real surprise, since she'd never read a romance. Terry writes mystery and romantic suspense, but calls them all "Mysteries With Relationships." Her 20+ published works include the Blackthorne, Inc. covert ops series, the Pine Hills Police series, the Triple-D Ranch series, and the Mapleton Mystery series. Her awards include the Silver Falchion and HOLT Medallion, among others.