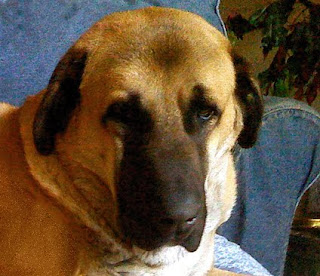 So you've probably seen the picture of that most adorable dog in our lineup to the right. His name is Ruh, and like all extraordinary dogs, he has his own bio. Here it is:

Ruh (pronounced "Roo") is a service dog for PPW President Chris Mandeville, and the unofficial mascot of Pikes Peak Writers. He is an Anatolian Shepherd Dog, a livestock guardian breed that hails from Turkey.

Ruh is a six year veteran of the Pikes Peak Writers Conference, and has proudly attended Write Brain sessions, workshops, book signings, and American Icon for his entire life. He is known to frequent bookstores, and during PPWC can often be seen taking a break in the conference bookstore with his "grandpa" Bill May.

Although Ruh enjoys writing on occasion, his favorite thing is hanging out with writers. He particularly enjoys soothing nervous conference attendees prior to their pitches, and celebrating writing successes with vigorous tail wagging.

Email ThisBlogThis!Share to TwitterShare to FacebookShare to Pinterest
Labels: Ruh