Teaching My Way Through the Baltic, Part I

Not long ago, I blogged about landing a teaching gig on a cruise through the Baltic. I’m back and would love to tell you about the experience: the good, the bad, and the wonderful. 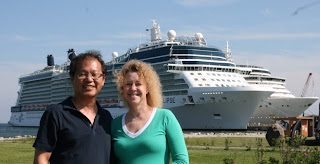 My husband, Wen, and I adjusted to the mid-June BST time zone by staying in London for a few days before taking a bus to Southampton then a taxi to the port. My special boarding letter allowed us into the VIP short line, but before we could get into it, we discovered the port personnel had no idea how to mark our bags. As a guest speaker, my state room wasn’t on the manifest. We were asked to leave them abandoned, isolated from the others. We could only hope they’d make their way onto the ship.

Once aboard, it took a trip to the guest relations desk to find out that our mystery room was just past the “crew only” door. When the bags didn’t arrive, we went searching. We soon found one of them outside another state room door and grabbed it. After informing someone who appeared to be a bag delivery man, we later got the other two.

The first meal was a bit chaotic, as they implemented new server rules after the last trip included a norovirus outbreak. That also explained the obsessive sanitizer guy at the dining room door.

I donned my spiffy blazer and met the activities director and the cruise director to film a teaser for the classes. It would air on the stateroom TVs. We filmed in what would become Wen’s and my afternoon Zumba/karaoke/pop dancing hangout the rest of the trip. In one quick take, I gave a brief bio and a general idea of what I would teach. I never turned the in-house TV station on to see it or the subsequent five classes I taught. 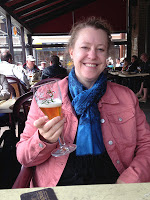 When the next day’s itinerary was delivered, I discovered that my classes were scheduled parallel to a quiz game modeled on a popular British TV show, as well as talks about coming ports. The competition was akin to teaching at a writers’ conference parallel to Donald Maass, Deb Dixon, and Robert Crais.

After the luggage SNAFU and the clogged up dining hall, I worried about whether there would be an A/V assistant helping me get hooked up to the screen when I was to teach the next day.

DAY THREE, Sea Day, 10:15am, first class: Have a Great Story to Tell? I was relieved the A/V guy was there, and that he was a perfect helper. I used a headset like Justin Bieber’s and felt like a star in front of the red velvet curtain, a screen the size of a three-car garage door, and one smaller one off to each side. There were 30 or so in the small theater and I discovered quickly that Brits and Australians (and a scattering of Irish and Scotts) were extremely attentive, but did not like to raise their hands when queried. I had to adjust; I was used to U.S. writer attendees who tend to be wide-eyed and eager to contribute. I was thrilled when several followed me out, complimenting my PowerPoint presentation, sharing their stories, and asking questions. The number of attendees who chatted with me after the sessions grew over the course of two weeks.

My husband and I are both gregarious. We chose the flexible dinner time and to be seated with new people each night. Along with dancing and socializing every chance we got, this was a great way to get to know many guests and talk up my classes—one reason the attendance grew. A new friendship sometimes overrides a quiz game!

The evening after my first class, we returned to our room to find a “job well done” iced-down bottle of Champagne and a plate of apples. Of course, I called the activities director to thank her.

DAY FOUR we strolled through former East Germany’s Warnemünde and took a train into the quaint town of Rostock to visit the Marienkirche Church and see the world’s oldest working astronomical clock (built in 1492).

DAY FIVE, at sea, I taught Writing Your Life to a bit larger crowd. Lots of fun energy and a few people willing to raise hands and ask questions. Balcony vantage at that evening’s Las Vegas-style show offered a view of a sea of gray and silver hair, many likely interested in putting legacies to paper. If my class motivated a few of those in the crowd to write their stories, I will have earned my free cruise for two.


Next post, I’ll offer highlights of the rest of the 14-day cruise and more on what it was like to be a guest speaker.

About the Writer:  Karen is an editor, ghostwriter, pitch coach, speaker and award-winning author of novels, cookbooks, and screenplays. She’s written over a dozen solo and collaborative scripts (with Janet Fogg, Christian Lyons and director Erich Toll); each has garnered international, national and regional recognition: Moondance Film Festival, BlueCat, All She Wrote, Lighthouse Writers, Boulder Asian Film Festival, SouthWest Writers Contest, and PPW Contest. Find out more at www.karenalbrightlin.com.
Posted by Shannon Lawrence at 8:00 AM