Monday night, Day 1 of National Novel Writing Month, the words finally started to flow. Characters stepped forward to claim their roles in my NaNo novel. The pirate refused to be killed off in chapter one. He has more work to do in the spinning of this yarn. Arrr, matey.

I exceeded my goal of 1,670 words. I was anxious to write while inspiration burned bright and clear. Then reality intruded in the form of my day job. Reluctantly, I set the alarm and turned in for the night. I slogged my way through work, my mind half in the office, and half in my fresh new NaNo world.

Tuesday night was the first Pikes Peak Writers NaNoTRYMo write-in at Borders bookstore. Familiar faces greeted me as I entered the coffee shop area. Keeping the chit-chat to a minimum, I snapped a few pics, said a few hellos, and unpacked my laptop.

Joking aside, part of my motivation for seeking publication is that I really like the writer’s lifestyle. No, not that mythical world of leisure, fame, and wealth. I’m talking about the ceaseless pounding of the keyboard, living in a mushroom state in the dim lighting provided by my computer monitor, my butt glued to a chair, while I agonize over how best to describe a moonlit forest clearing. 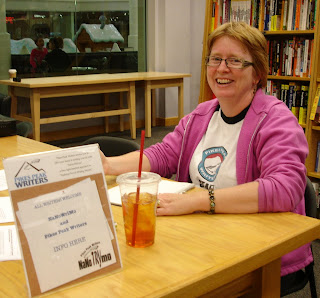 Other people attending the write-in had their own reasons. For M. B. Partlow, NaNoWriMo provides the fastest way to blast out a first draft. Deanna said, “Dammit, I’m a writer, not an actor,” explaining that writing is how she “acts” from her subconscious. Newcomer to the NaNo world Ange Marie said that attending the write-in assured that “I’ll at least definitely write for an hour, instead of doing housework, or going to gym.”

Photo of M.B. Partlow by Catherine Dilts
Posted by Pikes Peak Writers at 7:15 AM