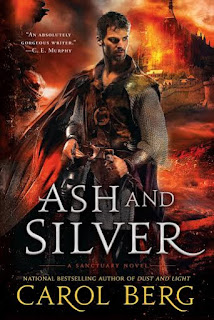 Lucian de Remeni's life has been irredeemably transformed since his portraits began to show things he couldn't possibly know.  His family is dead.  His own people accuse him of madness. Beings of legend insist his magic breaks the world that is already reeling from a bloody civil war. Lucian's pursuit of answers leads him to a secretive, violent military Order, a soulless mentor who steals his memory, and along a trail of corruption through the depths of history and beyond the boundaries of the world.

Carol Berg’s fifteen epic fantasy novels have won the Prism Award, the Geffen Award, and multiple Colorado Book Awards.  Her duology, Flesh and Spirit and Breath and Bone, won the Mythopoeic Fantasy Award for Adult Literature, and she is a regular panelist/presenter at writers’ conferences and science fiction conventions.  All amazing for one who majored in math and computer science to avoid writing papers.  Her latest novel, Ash and Silver, is out from Penguin Random House in December 2015.   She calls writing “the hobby that ate my life.”