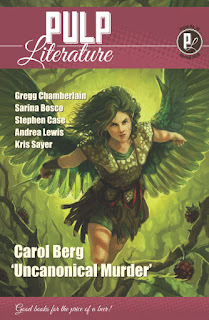 A fantasy detective story, set the world of her Collegia Magica series. High Constable Hue de Paien's investigation could cost him more than just his knees.

More from Pulp Literature Press’ website: Follow Hue de Paien, the High Constable whose detective work could cost him more than just his knees in Carol Berg’s ‘Uncanonical Murder’;
“Berg’s world, redolent of medieval France, is populated with living, breathing characters. … it’s clear the depth of thought she has brought to her creation. Her prose is clear and uncluttered. ‘Uncanonical Murder’ is also a decent mystery, something I’ve seen too many sci-fi and fantasy writers forget to succeed at.” – Fletcher Vredenburgh, Black Gate