Dialogue is one of fiction's heavy lifters. It advances the story by conveying information, revealing relationships, showing socioeconomic status and expressing characters' moods. Really good dialogue will perform at least two of these functions in every scene where it appears.

The best dialogue is also fraught with tension. And tension, as we all know, is what keeps a reader turning pages. 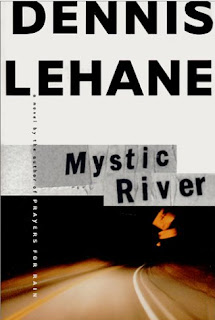 Here's an example from Dennis Lehane's crime novel, Mystic River. In this short scene, a man phones his wife to tell her that the police have found the car driven by their missing teenage daughter. The scene is almost entirely dialogue, with only two tags and a single narrative sentence used to strengthen our emotional response to the father's horror.

But the dialogue carries a lot of weight. In fewer than 30 lines, we not only advance the plot and gain insight about the characters, we get unexpected conflict. Lehane doesn't have to tell us anything about his characters. He shows it all through dialogue.

What does Lehane manage to accomplish in this brief passage?

He gives us information. One character tells another character something she needs to know.

We learn about the characters. We see what a tough woman Annabeth is, and how little she cares for rules or laws when it comes to her family. She shows us she isn't afraid to push around her husband, a tough ex-con. And we see this tough ex-con's vulnerability when it comes to his daughter.

We get a sense of these characters' socioeconomic status through Annabeth's language. We can figure these characters aren't college professors. They're people who've had to be tough to survive their neighborhood, and they're familiar with being on the wrong side of the law. Annabeth's use of "Jesus God" and "Jesus Christ" emphasizes her Catholic upbringing.

We participate in the raw pain of parents who probably aren't going to get good news about their daughter. That's an emotional payoff for the reader. 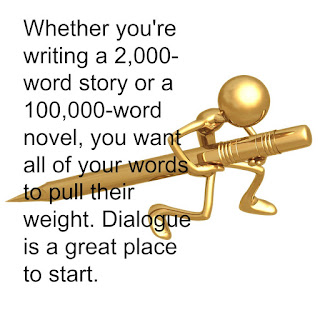 And most importantly, there is tension. Lehane could have had the mother sink to the floor, weeping. A painful scene, but not necessarily one that grips us. Instead, he creates conflict when she attacks her husband, shaming him for letting the police keep him out of the park. This shaming goes beyond telling us about the characters and their relationship. It has repercussions that ripple through the rest of the book.

In the first draft of your novel, it's probably enough to use dialogue to convey information, whether your characters are saying, "I love you" or "The Martians are coming." Get down the basic scene.

Then, on subsequent drafts, look for ways to add tension and character development by focusing not only on what the characters say to each other but on how they say it. And why.

Whether you're writing a 2,000-word story or a 100,000-word novel, you want all of your words to pull their weight. Dialogue is a great place to start.

About the Writer: Barbara Nickless is an award-winning author whose short stories and essays have appeared in anthologies in the United States and United Kingdom. Her debut novel, Blood on the Tracks will be published by Thomas & Mercer in August 2016. When not plotting how to hide a body, Barbara is a culinary enthusiast who enjoys hiking, caving and snowshoeing in the Colorado mountains. Visit her at www.barbaranickless.com.