Inside Author 101: A Sneak Peek at the Prequel Workshop

Author 101: Let the Journey Begin is just one of the three-hour workshops offered as part of the Thursday Prequel to the 2015 Pikes Peak Writers Conference. Robert Spiller is one half of the dynamic writing duo teaching this powerful, motivating workshop (along with Angel Smits), and he agreed to give us a look at what new writers can expect to take away from the experience.

PPWC: What was your path to becoming an author?

Bob: When my second marriage evaporated, I took off on a three-week bicycle ride in the Four Corners area. I was equipped with five spiral notebooks and an idea for a sci-fi novel. By the time I ended up at the Telluride Bluegrass Festival, I had written the bones of that novel. In 1998, I attended my first PPWC with three intentions: win the PPWC writing contest, pitch that novel, construct a critique group. I won second place, pitched the begeebers out of the novel, and formed a killer critique group. Unfortunately, that novel never saw the light of day, but I was sold on the Pikes Peak Writers Conference. By the following year, I had written my second Sci-fi and pitched it as well. Still, no takers. Then I thought I’d try my hand at mystery writing with a female mathematician sleuth. The Witch of Agnesi sold to Medallion Press (a medium size press out of Chicago, no agent) in 2005. After that came A Calculated Demise, then Irrational Numbers, and most recently Radical Equations. For most of my writing career, I have taught Mathematics, so I wrote when I could. Now I have the luxury of being retired and can write at my leisure.

PPWC: What’s one piece of advice you wish someone had told you at the beginning of your career?

Bob: Sit your butt in the chair. There are a lot of reasons not to write. Life is a complicated and demanding business that will seem so reasonable when it whispers in your ear any number of things: You’re tired, You have nothing to say, You got too much on your plate today. You name it and some small voice will whisper it into your ear to keep you away from putting words on a page. Don’t even get me started with game playing, Facebook, and e-mail. So, here’s the deal. Not every day will generate first rate prose. Some days your task is to sit down and write the cow pucky that’s forefront in your brain, but know this. Right behind the junk is the good stuff that was just waiting for you to remove the dross so it could leap into your story and make you remember why you became a writer in the first place. So, put your butt in the chair.

PPWC: How do I untangle the different genres so I can figure out ‘What I Write?’

Bob: For me the answer – as someone who has written YA Mystery, Cozy Mystery, Sci-fi/fantasy, and is currently writing a historical mainstream – is my critique group. If I didn’t have this resource, I would avail myself of the many services of Pikes Peak Writers. Writer’s Night with Deb Courtney would be a good place to start. This collective evening of writers, both published and not-yet-published can steer you toward identifying the genre of your piece and help you make choices based upon that identification. Literally go to the meeting and say, “I need help identifying my genre.” Another resource is Write Brain. Scope out the expertise available in these monthly classes. I have learned valuable lessons and I have no doubt between the teachers and the other participants you can find someone to help you identify your writing’s place. Lastly, there is the Pikes Peak Writing Conference. What I did when I was first starting out was find like-minded individuals at this wonderful conference that I would use as a resource. They identified my genre, critiqued my work, and helped me keep my head on straight through some trying times.

PPWC? Which publishing path do you recommend for new writers?

Bob: I don’t have any specific recommendation. I have friends who have had success going the traditional route: Agent, Major Publishing House, both self and in-house promotion of their book. The advantages of this route are numerous. A good agent will help you edit your work to publishable quality; they will guide your career. A major publishing house will help guide your book onto bookstore shelves. This avenue of distribution is amazingly helpful. Hopefully, their promotion departments will guide you in the often tricky business of getting the public to notice your work by setting up reviews in major publications such as Publisher’s Weekly and Romantic Times.

At the other end of the spectrum, I have friends who are currently having success even though they self-published. They have availed themselves of the services of such self-publishing aids as CreateSpace and Amazon. They have designed their own covers. And after much work, have reaped the rewards of keeping all of their profits. In between these two extremes are un-agented small presses, of which even the relatively small community of Colorado Springs has a few. These small presses take on all of the worry of producing a quality product for a relatively small percentage of the profits. A good small press will also provide much of the promotion that only the larger presses provided just a few years back. I wish I could be more helpful in steering you toward the path that was ideal for you but in this changing era of publishing there are just too many viable options to rule any of them out.

PPWC: How can this class help me get started?

Bob: Getting started is what Author 101 is all about. We have four hours to share what we’ve learned in over twenty years of being in the game. The subjects covered will include: Critique Groups, Writing Advice, Publishing Paths and their Pitfalls, and Genres just to name a few. With such a large block of time my partner and I will endeavor to answer every one of your writing and publishing questions. We will lay bare our souls and tell you what has worked and what has not worked for us. In the end, hopefully you will come away with a better understanding of what it will take to get your masterpiece in the hands of folks who will cherish reading it as much as you loved writing it.

PPWC: What’s your favorite part of being an author?

Bob: That’s a toughie. First of all, I love it when I write a scene and it works. In mystery this means laying out the puzzle in a fun and informative way. In my current project this means being fearless and allowing my main character’s flaws show through. I also love meeting with readers and talking about writing and books. I guess one of my favorite things is when readers e-mail me and talk to me about what they liked about Bonnie Pinkwater or how a scene affected them. Currently, I’m collecting e-mails from every state in the union. Yeah, it’s pretty much all a good gig.

The 2015 Pikes Peak Writers Conference takes place on April 24-26, with extended Prequel workshops on Thursday, April 23. The Prequel can be added to registration for the conference, or can be purchased as a stand-alone day. 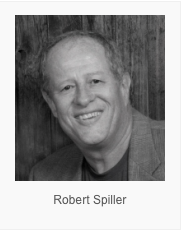 Besides being a master of space and time, Robert Spiller is the author of the Bonnie Pinkwater mystery series: The Witch of Agnesi, A Calculated Demise, Irrational Numbers, and most recently Radical Equations. Napier’s Bones, the fifth in the series is due for release at the end of 2014. His math teacher/sleuth uses mathematics and her knowledge of historic mathematicians to solve murders in the small Colorado town of East Plains. A retired mathematician, Robert lives in Colorado Springs, Colorado with his wife Barbara. Robert has taught a number of classes at PPWC, Write Brain, Authorfest, Texas Middle School Conference and the Rocky Mountain Fiction Writers Conference.

Posted by Writing from the Peak at 9:00 AM