Friday night at Pikes Peak Writers Conference 2014 is an optional steampunk dinner, where you're invited to dress up in steampunk regalia. Not sure what that entails? No problem! Aaron Spriggs, expert on all things steampunk, is here to give us some tips.

Steampunk: What it would have been like if the future had happened sooner.
First, let’s start with what “steampunk” is, and where it came from. In the 1980s, cyberpunk speculative fiction was all the rage. Author K. W. Jeter told his publisher his next cyberpunk novel would be set in the Victorian age and that it would be a ‘steam-punk’ story, to paraphrase.
Steampunk has been around for over one-hundred years, but was only then codified. In the most stripped down, bare bones sense, it is the outsider or underdog (punk) fighting the system. The ‘system’ can be just about anything, such as government, big corporations, the church, social norms, etc., and it is set in a time period where steam was the dominant, most advanced technology (the "steam" in steampunk). It was solely science fiction, but the recent trend is to include fantasy/urban fantasy into the mix. For me, I prefer my steampunk straight-up sci fi, but I’ve read some great stuff with fantasy elements included.
The costuming, or cosplay (costume play): Any historical clothing combination from about the 1790s to the 1910s works great. Mixing and blending from cultures around the world is even better. Throw in some goggles (always be prepared for that open gondola/dirigible/train ride), add a splash or two of sexy, and you’ve got a great steampunk outfit.
Costumes trend towards the upper class styles of clothing, but mechanics, engineers, and adventurers are all very commonly found, as well. Remember, classism was alive and well, and can be played up in costumes.
Femmes: Corsets are common for women. They’re sexy and fun, they flout social dictums being worn on the outside visible to all, and they go with just about everything. Itty-bitty hats pinned on are big (big as in popular, not in size - I just said they’re itty-bitty). Parasols work as props, as portable shade/rain protection and as weapons. Don't forget the ever present goggle.
Hommes: Pith helmets, bowlers, and top hats are all very common. Canes (sword canes, even, but check with state and local laws….) are an excellent accessory. Tuxedos and smoking jackets with patterns are good pillars in any man’s wardrobe. If you have the time, grow mutton chops! And have I mentioned goggles?
Colors: Anything goes. There is a prevailing attitude for earth-tones, but the Victorians had the full color spectrum to use, and they did so. Historically, they often had dark cloaks and jackets to deal with industrial soot and the new pollutions, but their clothes (from around the world) have always had colors, so don’t be shy. Patterns (such as paisley) and stripes are very popular with steampunks, too. Ignore the snarky “steampunk is when goths discover brown.” Haters gonna’ hate. Remember punk not caring? There you go.
Accents: Gears, watch parts, springs, and the like. There is some snarky-ness to gluing these items on clothing (such as hats and lapels), but I like them. After all, steampunk has taken on an aspect of cargo-cultishness, and thus ‘worship’ of the industrial elements is only natural - and expressing such worship via adornment is very natural. So I say glue that cog on and be proud!
Squid and octopus is a super-strong theme as well, heralding from “20,000 Leagues Under the Sea” by Jules Vern. Again, rings, necklaces, tattoos for the hard core - do it up!
Finally: RAY GUNS!* Among steampunk is the fringe science, pushing the bounds of believability, and ray guns is the vanguard of such tech. Make those ray guns out of anything available: candelabras, tattoo guns, welders, water pistols, nerf guns etc. Do it up. Sneak in a hidden battery and light it up with LEDs, bubbling oil in tubes, vacuum tubes, air cartridges, etc., etc., etc.
Remember, you’re punks. There is no right or wrong. If a hard core fanboy tries to tell you those faery wings ‘aren’t steampunk, turn your punk dial to 11 and give him a quote or two from Blaylock (steampunk author with fantasy elements long before steampunk was defined).
Now get cracking on that anti-kraken semi-aquatic de-hydration auto-illuminating musket, and make sure you have your goggles firmly around your hatband, just in case…
*Note: The Marriott has asked that there be no weaponry, even costume weaponry, brought into the venue. 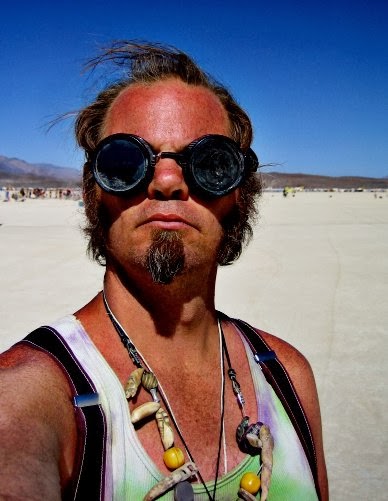 About the Author: Born before the Lunar Landing in the Land of Enchantment, Aaron has lived in many states of the Union, but has reduced his relocation rate and has lived in Colorado since 1980, all up and down the Front Range and mountains, and currently resides in Denver.
Aaron has published a few short stories and several poems and is sitting on a few novels, like everyone else.Scientist by day (hazardous waste management in the past, and entomologist/zoologist these days) and poet/musician by night, Aaron has gone on several musical tours around the USA. He plays trumpet poorly and theremin passingly. During the heat of summer, Aaron can be found at Burning Man every year.