Feel the fear… and run the other way by Shannon Baker

(Originally posted at the Inkspot blog on December 28, 2011)

“You won’t believe what just happened.” The Man With Endless Tolerance (MWET) with whom I live, said over the phone. “A guy tried to land without putting down his landing gear. The whole runway is shut down.” 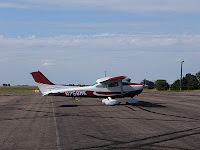 Despite sitting at my desk fifteen miles away, my heart rate spiked into the red zone. MWET is a general aviation pilot. He has a sweet Cessna 182 that he loves a lot and makes travel easy and fun. Well, fun for him, anyway. I read and sleep and hope for smooth tailwinds. I’ve never panicked when flying in turbulent skies. Hardly ever, anyway. And I’ve only tossed my cookies once…so far.
I usually study the landscape during landings, wondering who lives near the airports or have my nose stuck so far in a book I’m oblivious to the ground rushing up to meet us. Occasionally, I’ve tried to accustom myself to the fine art of landing. Every time I pay attention I break out in a cold sweat. There is an acronym MWET recites so he remembers every step. GUMPPFI or is it GUMPPFY? Gas, Undercarriage (that’s the landing gear part), Power, Pitch, Mixture, Flaps---and what else? WHAT ELSE!? That memory lapse is the stuff of nightmares.
I know what Eleanor Roosevelt said, “Do one thing everyday that scares you.” Why in dog’s name would I want to do that? I hate to be scared. I don’t face my fear like a conquering warrior. I deny it, sneak up on it and try to do an end run around it. I whistle past the graveyard to keep from disturbing the spooks instead of going all Buffy on their ass.
What I lack in courage I make up for in denial. I never watch the needle insertion when giving blood; I take myself to a happy place full of bluebirds, talking deer, and thumping rabbits. I’m one of those people who stub their toe and limp around saying, “Didn’t hurt, didn’t hurt, didn’t hurt,” for two days before admitting it’s broken. I’m so good at this my daughter once bought me a t-shirt that said, “Denial. It works for me.”
That’s how I deal with writing novels. If I thought too much about the writing business I’d be a whimpering, quivering mass in a corner, too afraid to write an email, let alone a whole novel. 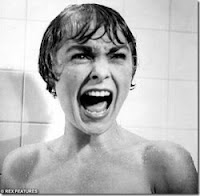 So I write a really nasty first draft. That’s not a big deal because no one but me will see it. Then I’ll edit it a few times and polish it up and that’s okay because only my critique group will see it and they’ll save me from embarrassing myself. Then I start whistling and sending it out to professionals and go about my daily business doing my best to forget it’s out there. Denial, bluebirds, whistling through rejections, sales and publishing. Who needs courage for that?
If I hadn’t played Mind F*&%k with myself all along, I’d have had to face (and probably succumbed to) paralyzing fear. I’d never have become a mother and yet, my daughters are pretty terrific. I’d never have learned to scuba dive, which I love. I wouldn’t have moved from Nebraska to Colorado and then on to Arizona and experienced my life expanding all around me. And I certainly would never have written a book, let alone a couple of them.
I guess I’ll take some landing lessons soon. Not because I will finally “grow a pair.” The truth is if I ever really need to use those lessons, it will be because I’m the only one who can land the plane and the fear of splattering all over the landscape trumps fear of forgetting to put down the landing gear. What does that I or Y stand for anyway?
What about you? Does writing, plotting, or the book business make you tremble in your shoes?
About the Writer: Shannon Baker has a right brain/left brain conflict. While the left brain focuses on her career as an accountant, her right brain concocts thrillers, including her 2010 release, Ashes of the Red Heifer. A lover of mountains, plains, oceans and rivers, she can often be found traipsing around the great outdoors. The first book in the Nora Abbott Mystery Series will release in the fall of 2012 from Midnight Ink publishers.
Posted by Pikes Peak Writers at 9:00 AM