I’d never won any writing award ever...in my 50 years of writing. I came close in a contest in 1993 (second place), but that was it. And I don’t usually enter contests. But I did for this book. I thought sure the cover would win first place (I mean, it is suitable for framing!). But further than all this...which might seem easy to say now...but I actually had a pretty strong feeling that I would (most likely) win this category. I’ve often read that if you expect certain things to happen—even against all odds—they will materialize. And as much as I’ve tried to live that weltanschauung, most of the other times felt forced and never panned out, in terms of contests. But not this time! This contest. It just seemed like a foregone conclusion in the feel of it all. It’s not to say I was cocky or arrogant...it’s not. It was just a deep feeling I had. And I tried my best to keep all the Doubting Franks at bay, in the background. Swept them away with my internal mental brooms. Did not get cocky about it. Did not feel entitled about it. No...I just felt the feeling and allowed it to be. Allowed myself to believe it.
What a wonderful surprise after two crazy years of work in putting all this together! Heck forty years of writing. Also in finding my high school teacher from that 5th period 11thgrade English class...who I convinced in writing a few words for the book itself! I am just...amazed. Some plans do come together. And I can’t thank everyone enough for their parts in the creation of this anthology and it’s award. All of you own a part of this award. Those named and unnamed...forgotten and remembered. Forty years. Forty years in the making! You all helped...gave me of your time...a chunk of your lives...and that is important to me. I know I’ve said “Thank You!” plenty of times, so I will stop that now. But you know how I feel! 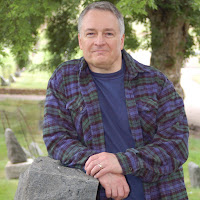 F. P. (Frank) Dorchak writes gritty, realistic supernatural, metaphysical, and paranormal fiction. Frank is published in the U.S., Canada, and the Czech Republic with short stories, non-fiction articles, and five novels, Voice, Psychic, ERO (semi-autobiographical), The Uninvited, and Sleepwalkers. His short stories have appeared in the off-the-grid The Black Sheep; You Belong 2016, Words and Images from Longmont Area Residentsregional anthology for 2016; The You Belong Collection, Writings and Illustrations by Longmont Area Residents regional anthology for 2012; Apollo’s Lyre. Frank can occasionally be reached in séances, and his website is www.fpdorchak.com.
Posted by Writing from the Peak at 6:30 AM