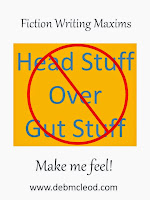 I know some there are published authors and professors out there who when asked how much backstory is OK to use, will answer with an emphatic: NONE. I get where they’re coming from. It’s important not to break the flow of the story by taking us off to a different time and place, not to mention a different character, really. Who the character is now is not who the character was then. And if you haven’t yet “seated” your reader firmly into the present story, you risk losing them by taking them back. If you have hooked them firmly enough into the story, then why take them back?

In my practice, I have seen stories that have so much backstory it makes you wonder why the writer didn’t just write the story in the past. In that case, I have found it often signals an author who is keeping a safety layer in place between himself and the emotion of the story. Oftentimes then, too, the backstory is narrated and not in scene. The backstory explains rather than creates a fictional world the reader can experience. Head stuff over gut stuff, if you know what I mean.

It’s easier to narrate a painful scene and explain it than it is to put yourself into the scene in order to write it. But as authors, that’s our job. To face the emotions unflinchingly every single time we sit down to write. That’s why readers read. They want to be in the story. We owe it to them to give them that.

It’s a matter of why
I firmly believe that there are at least two drafts of a manuscript that need to be completed before the writer seeks out opinions on the work – except for mine, of course! There are many reasons I believe that but I won’t get into groupthink books, or protecting your voice or bashing anyone’s writing group. For the purposes of this blog, I want to point out that the first draft of the work is for the writer. We’re writing along and figuring out the story and putting everything into the draft to see what the story might want to be. That is a great way to write a first draft. The author needs to know the why of all of it. 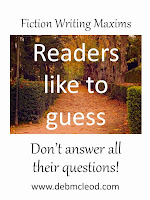 But does the reader? You don’t have to answer all their questions. And you especially don’t have to answer them before they’ve begun to ask. If you’ve succeeded in getting the reader to suspend disbelief long enough to get to the place where you might feed in some backstory, maybe you don’t need the backstory at all. Remember, you’ve got them hooked. Don’t break the spell.

Let me explain. When readers are hooked in the first scene, they’ll keep reading. If you break it to say: Hey, I know what he just did was really strange, and you’re probably wondering why a guy would do that, let me explain. One day when he was five…. See how it breaks the flow?

Do you remember the structure of the “workshop short story?” Open in action, backstory for explanation, conclusion. Ad nauseam.

When you need backstory

Sometimes you may need backstory. In my revision class, one of my clients is writing a story of a woman’s journey to find herself and break away from an abusive husband. By the time the story starts, the husband is thoroughly despicable. In the timeline of their marriage he has slowly descended into madness. When the story starts she has just fled for her sanity and for her life.

If my client doesn’t put any backstory in to reveal what life was like before and to document at least part of his descent, the reader may wonder what on earth the main character saw in this guy in the first place. Why would she marry a guy like that? His being a fully fleshed out villain reflects on her. This situation might make the reader question whether they really want to follow such a clueless heroine. Or even worse, it might make the reader wonder if she has some sort of victim wish. And who wants to read about that?

So it’s necessary for my client to include some backstory. Once they were in love. Once he was the golden boy she fell for. His possessiveness and his actions with their children and his job and his family weren’t there when she first met him. So now that she knows she has to give us some of the why of it or the how of it, how should she do that?

Narration is the way of the first draft. Oftentimes a writer might be tempted to narrate the whole timeline of events and explain the why of it. But narration keeps both the writer and the reader in observer role and outside the soup of it. When you choose to narrate a scene, especially a backstory scene, remember that if the writer is one layer removed, how far out from experiencing the story is the reader?

A better way might be to have something motivate her to remember in the current story. Something triggers the memory and then both she, and the reader, are in a flashback to the past. A mini-scene might be called for. Just like a memory, a mini-scene is not the whole of it. When you remember a person or an event, you remember a glimpse of something from the past.

When I think of my best friend from childhood, the first thing I think of is the night we were out way past bedtime. (Did we sneak out? I have no recollection, Senator.) What I remember is walking down to the end of our street, which ended in the woods. There was a full moon. It was a cool summer night. As we crossed from the quiet street onto a path into the woods, I said, “It’s a perfect night for a murder.” And we proceeded to tell each other stories that scared the pants off us. I even remember in my senior yearbook she wrote that she would always remember ‘the perfect night for a murder.’

It’s a flash of a memory, not all the sleepovers, not all the games and phone calls or how we grew apart in the end. If I were including that night with my best friend in a story, I’d take the reader back to that night in a mini-scene at least. I’d work on creating the titillating fear of being out when we shouldn’t have been. I’d tell one of the stories we told and bring the reader along to stifle a scream when we heard a rustle in the bushes. But that’s all. Then I would move back into the current story that presumably had some reason for me to flash back.

So, in order to keep the reader in the emotion of the story, my client might choose a mini-scene that illustrates the golden boy years. In this case it might be the first time she met him. But it’s in scene, in real time and not in narration.

So now she has a great, gaping gap between the mini-scene of backstory to the golden boy and the character he is now. Again, she can choose to narrate some of the time that he spiraled downward. But maybe a more effective strategy would be to write more mini-scenes and disperse them throughout the story. A handful. Less than a handful. Timed when there’s a reason for her to remember.

What would you add to this about backstory? Have you successfully created a strategy for backstory in your work? I’d love to hear about it!