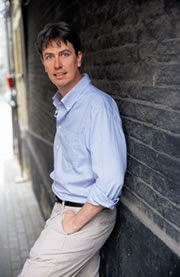 Will Adams is a successful novelist based in the UK. He has created a unique archeological thriller series based on a heroic character named Daniel Knox. His titles include: The Alexander Cipher, The Exodus Quest, The Lost Labyrinth, and just released -- The Eden Legacy.

Question: Your novels are tightly plotted and paced expertly. One can assume there’s planning on your part with this. How extensively do you outline or plan the novel prior to beginning the prose? Do you know the entire story before you start, or are you a “just in time” kind of author that has a general idea of your direction and uncover the bones of the story – not unlike Knox and an archeology dig?

I’ve tried plotting books from the outset, but it doesn’t work for me, so I’m much more of a jigsaw-puzzle author, in that I put together small scenes in my mind, then try to find ways to fit them into the larger book.

I think that’s partly because of the genre I work in. My books are essentially treasure hunts, so the first thing they need is a lost treasure, preferably with an interesting historical mystery thrown in. Once I’ve picked on a basic premise, therefore, I’ll read up on it and go scout out potential locations. With any luck, I’ll come up with a lot of ideas for possible scenes and revelations during my research, which I’ll then try to knit together into a coherent plot, all aimed towards an explosive final discovery.

Inevitably, however, I’ll find that my first draft or two are very uneven (with massive plot-holes and way too many exposition scenes next to each other, for example, or too many uninterrupted action sequences), so I edit my books over and over again until I’m satisfied the plot is tight enough and the jeopardy, history and romance are more evenly distributed.

Question: Now tell the truth, is The Alexander Cipher your first novel, or is there a box somewhere collecting dust with novels past that served you as training vehicles along the way? A famous author is quoted as relating to an informal survey he performed with publishers asking this very question, and the answer he correlated is that the first published novel is commonly the fifth for the author?

Yes, I completed at least five other novels before I finally got published (though the precise number depends on what constitutes a finished novel). I actually think that some of them are rather good – but sadly my agent disagrees, and I trust his judgment.
The Alexander Cipher is in fact one of my earlier efforts, but while I put aside most of my other books from that period, I was so convinced by the basic premise of the story that I kept coming back to it (the published version is completely unrecognisable from the first draft).

I think the blunt truth is that writing novel-length fiction is hard. There are so many elements you need to get right (pace, insight, characterisation, authenticity, research, flow etc) that it’s not surprising that it takes time and practice. There are some people around with an extraordinary natural flair, but most of us learn by doing it wrong first. I certainly did.

Question: Any advice or hard earned wisdom to share on the query and pitching process?

I have no advice on searching for an agent, other than to keep at it and don’t let yourself be dispirited. I had The Alexander Cipher rejected by every plausible agent in England, some of them twice or more. I even began submitting it under aliases, out of paranoia that agents would recognise my name and think ‘oh no, not him again!’ But I kept working at making it better, and every time I saw that a new agent was setting up business, I’d send it to them too. And finally one of them said yes.

Question: You now have three Daniel Knox novels in print: The Alexander Cipher, The Exodus Quest, and The Lost Labyrinth. Are there any new Knox adventures on the horizon, or possibly on your lap top? Are you planning a new series or any one-off novels soon?

I’m finishing up the fourth one now, set in Madagascar and called The Eden Legacy, but it will be the last Daniel Knox book for the time being. I’d like to try something very slightly different (though I don’t yet know what).

Question: On preparation: Do you perform extensive research and site visits to your locations when initiating a project, or are you more of a virtual traveler utilizing the internet and libraries to create your scenes and plot points.

The Internet’s great, but for me there’s no substitute for getting to a place myself and scouting it out. I typically spend two or three weeks on site at the beginning of a new book, and another two or three weeks at the end. To be fair, however, I get to set my books in beautiful places like Egypt and Greece and Madagascar, and I love travelling to exotic places, so doing the on-site research isn’t exactly a great hardship.

Question: How long from concept to finished first draft does it take to create your novels?

About eighteen months (which is why I find it so hard to produce the one a year that my publishers want!).

Question: You live in the UK . How much success do you see at home, and here in the US? Is there a foreign deal that you’re particularly pleased about? Have you been translated into Russian perhaps? How difficult is it to enter a market other than your home market?

I was very lucky with overseas sales. Because Harper Collins made a big bid for my first book, it generated a lot of publicity, including a big interview in the Times of London. Off the back of that, I had offers flooding in from all over the world. After so many years of struggle, it was wonderful but surreal. And, yes, my books have been published in Russian, as well as Romanian, Serbian, Japanese, Thai, Hebrew and a bunch of other languages (I think The Alexander Cipher has already come out in over twenty markets now – though a lot of that is to do with how popular a figure Alexander the Great is). As for places where I’ve been most successful, it’s hard to know exactly, because I don’t get as much feedback as people might think. But I suspect that would be the UK and Germany – The Alexander Cipher actually made it to number three in Germany, which was wonderful; and it also briefly made it onto the New York Times mass-market bestseller list.

Question: Is there any advice based on your perspective about the entire process of the novel you’d like to share to new authors?

Let me start by saying that every writer is different, and so I’m only speaking for myself here, but one of the reasons it took me longer than it might have to find a publisher was because that I was trying too hard to impress readers, and not hard enough to entertain them. It’s an easy mistake to make, not least because there’s a certain amount of vanity involved in being a writer. In genre fiction, however (and as opposed to literary fiction), you have to clamp down hard on that. An obvious analogy is a sport’s referee: typically, the less you notice them, the better the job they’re doing.

I used to think that it was possible to write literary fiction that was breathlessly exciting too. But when you think about it, one of the jobs of the literary author is to make their readers put down their book for a moment so they can admire their imagery or mull over their ideas; but if, as a writer of a page-turner, your reader puts your book down for any reason, that’s a kind of failure. That’s absolutely not to say that genre fiction can’t be well written (I think Thomas Harris’s Red Dragon and Silence of The Lambs are superbly written, for example), just that different kinds of books have different aims, and that every writer should be aware of that.
Posted by Pikes Peak Writers at 6:13 AM