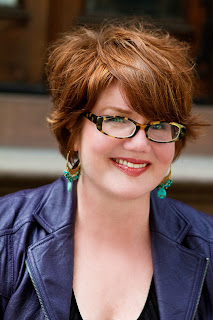 The first thing you need to know about Libba Bray is that she has a great sense of humor. If you don't believe me, you should check out her website (link below) or view the video I've included on this post. On her website, she has condensed her life story into a quick, witty story you're bound to get a kick out of.

Libba (or Martha Elizabeth Bray) is one of our keynote speakers at PPWC 2013. She published the Gemma Doyle Trilogy before going on to write The Diviners, about a girl sent off to live with her uncle in a freaky museum of the occult; Beauty Queens, which resembles Survivor with beauty queens; and Going Bovine, about a boy with mad cow disease and the hallucinations to prove it. She's also had stories in quite a few anthologies, many with dark overtones.

A New York Times bestselling author, she has received the Michael L. Printz Award (Going Bovine), and Beauty Queens received the honor of being named one of the Best Teen Books of 2011 by Kirkus Reviews.

The daughter of a minister and a teacher, Libba went through a time where she wrote copy for Richard Simmons. Ultimately, she became a published author and joined a band with three other YA authors. Her fellow Tiger Beat musicians are Daniel Ehrenhaft, Natalie Standiford, and Barnabas Miller.

After the list of places to find Libba Bray, I've placed a video of her book trailer for Going Bovine. It's a video you don't want to miss, especially if you plan on making a book trailer some day. Or if you like to laugh and be entertained.

And now, I leave you with her book trailer for Going Bovine:

About the Author:  Shannon Lawrence is a mom of two, a freelance writer and aspiring novelist.  She lives in Colorado Springs and is inspired by the beauty of Pikes Peak and the Rockies.  After years of letting her writing fall by the wayside, she has recently thrown herself back into it.  Her main focus is fantasy and horror and she has just finished a Young Adult Fantasy novel.  She has a flash fiction piece featured in the anthology Sunday Snaps: The Stories, due out in 2013.  She has also discovered a love of photography and enjoys photographing the breathtaking Colorado scenery and wildlife, as well as her children.  She blogs about reading, writing and photography at www.thewarriormuse.com.
Posted by Shannon Lawrence at 8:00 AM